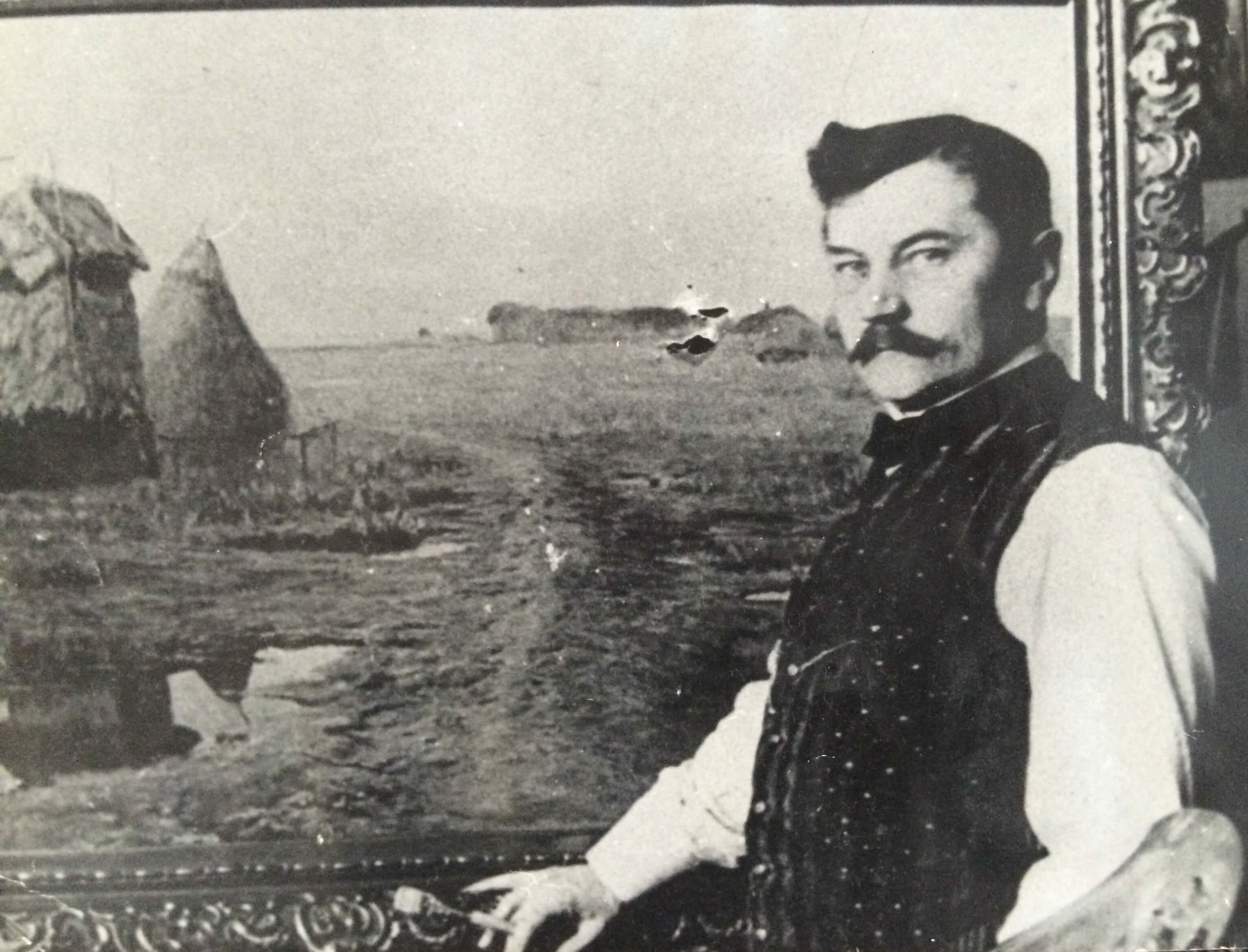 We used to call him ’Ojczulek’ according to the family tradition that he brought out of the home, because he also called his father Rafał Wąsowicz a ’Ojczulek’.

My grandfather Rafał Wąsowicz an artist-painter, in front of a painting with a pallet and a paintbrush in hand during the work. One of the few preserved photographs of my grandfather.

I didn’t know grandfather Rafal because he died, on august 6 -1944, at the hands of the Nazi oppressors during Hitlers revenge for the Warsaw Uprising. After the destruction of Warsaw, not much of his artistic heritage has been preserved, but recently his paintings have appeared more and more often at various art auctions 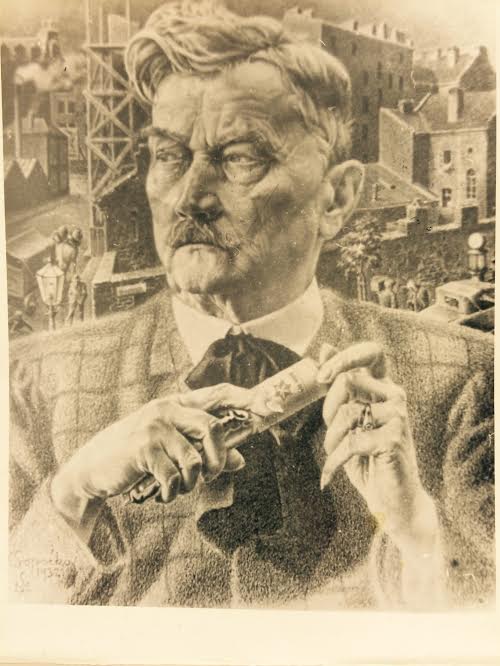 Portrait of Rafał Wąsowicz made in the lithography-technique in 1932 by his son-in-law, graphic artist, illustrator Konstanty Sopoćko on the occasion of the 65th anniversary of his father-in-law Rafał. All the objects in the background illustrate Rafał’s various undertakings, also the tube of paint he is holding in his hand was a product of his enterprise.

My aunt Maria Wąsowicz-Sopoćko miraculously survived the Warsaw Uprising losing her 13-year-old son Krzysztof Sopoćko in it. She was an excellent watercolorist and after the war she worked in Warsaw as an art teacher until the old age. 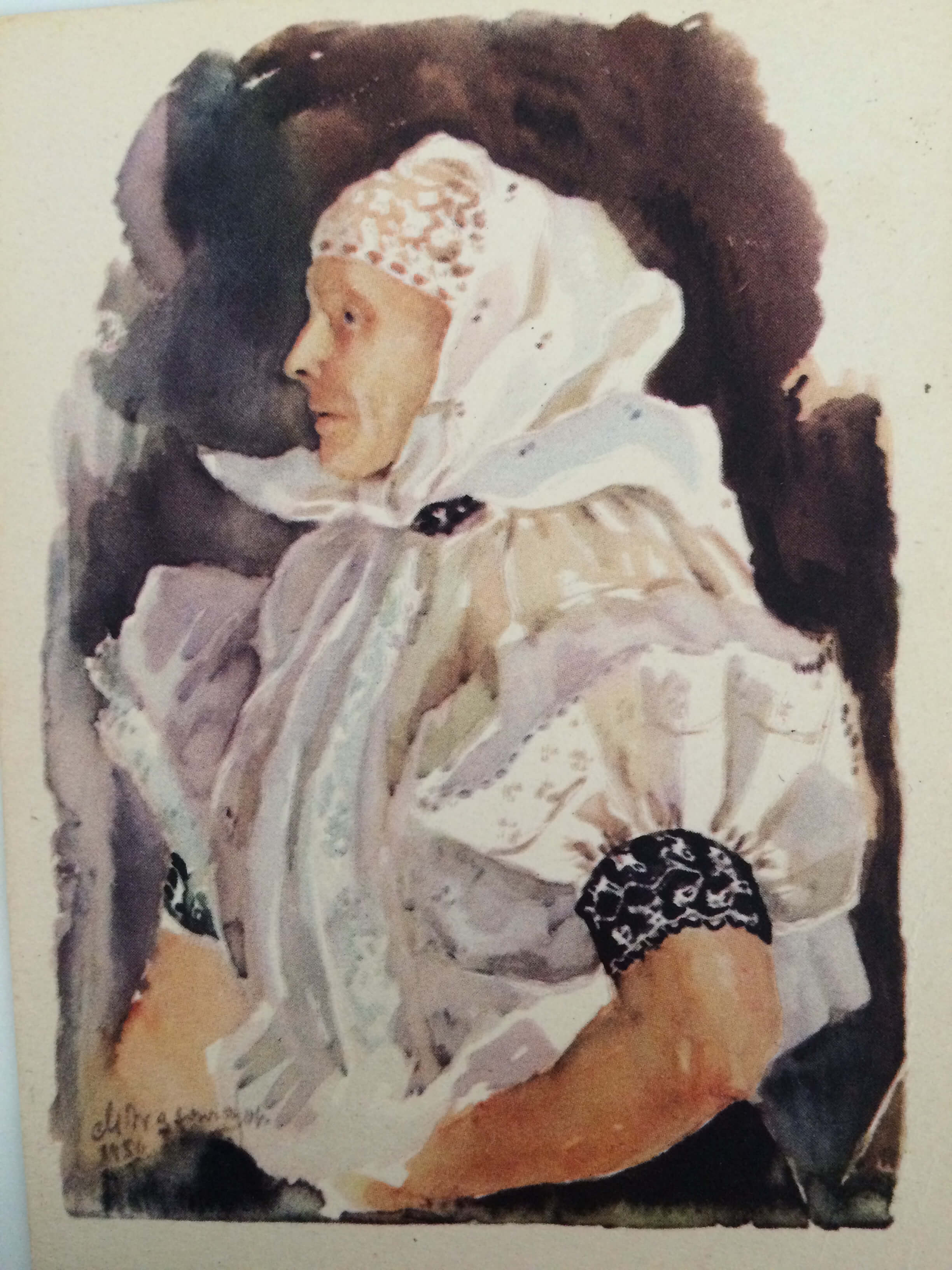 My uncle Tadeusz Wąsowicz, PhD in Edaphology after the Warsaw University of Agricultural Sciences (SGGW), left Poland in November 1939 after the capitulation to avoid being interned by the occupant. He is 36 years old at that time and since leaving his family home in Warsaw he has been keeping a meticulous diary. Thanks to the help of friendly highlanders he made his way through the Tatra Mountains to the south and after a long journey – through Slovakia, Hungary and Yugoslavia – he joined the Polish army in France. The end of the war found him together with the Polish army in Scotland.
After the war Tadeusz remained in distress in England where he worked as a scientist and later taught at London Borough Politechnic and the Imperial College of Agriculture in London where he died in 1967 at the age of 63.
After Stalin’s death, the contacts with Western Europe gradually began to come alive. Like many Poles who remained outside the country after the war, Uncle Tadeusz, after constant efforts, regained contact with his younger brother Dariusz and learned about the tragic fate of the family in Warsaw. The brothers hugged each other again only after 25 years in July 1965, when Ojczulek was allowed, by the authorities, to leave Poland to visit his sick brother Tadeusz in the Polish hospital Mabledon near London. Brothers Tadeusz and Dariusz Wąsowicz reunited in the garden of Mabledon Hospital in July 1965.

Tadeusz Wąsowicz also worked in the tropics, among others

in Nigeria, Sudan, British Guyana, as a soil expert.
He knew and spoke several Arabic languages.
Apparently, he was so kind to the people he was dealing with that they said, while talking about him,

– “what kind of a country is this Poland that there are white people good for the blacks?”

Uncle Tadeusz decided to give his new nephew and nieces in Poland a gift in the form of English language and came up with a plan he called “A window open to the world”. For years, he was treading the thresholds of both the Polish embassy and the Home Office in London, until finally, unbelievably enough, he obtained the permission for Daria, his eldest niece of 12 years old, to come to England for a full school year. After her return, I went to England, followed subsequently by the youngest of us, Blanka. Jacek used his uncle’s gift to study the violin in Brussels only after the death of uncle Tadeusz who, in his will, took care meticulously also of that.

The life of my Ojczulek is an example of the fate of many Warsaw citizens and their families. He was born on December 1st, 1909 as the youngest son of the artist-painter Rafał Wąsowicz and the pianist Aniela Wespańska. In his passport, however, he had his date of birth on January 10 ,1910 because, in order to postpone his military service for a year, he was registered after New Year’s Day. Little Dariusz was a lively troublemaker, so he was sent by his father Rafał to the Cadet Corps School in Modlin. Apparently, the Warsaw home residents knew when, as a punishment, he was not allowed to go home for the Sunday, because his dog Fidel was not waiting for Darek at the front door as usual, but was lying quietly in the kitchen. Ojczulek didn’t talk much about his pre-war life and the years of the German occupation, and if we asked, he told rather such funny stories from his childhood and youth.
Dariusz dreamt of studying painting or at least architecture. However, father Rafał had other plans for his youngest son, as there was already one artist in the family – his eldest daughter Maria – and he sent Dariusz to Belgium to study foreign trade at the Institut Supérieure de Commerce de L’Etat in Antwerp, where more Poles studied at the time.

After returning to Poland with a bachelor degree in his pocket, Dariusz worked for the Ministry of the Finance. He got married and had two children: a son, Rafał, born on May 30, 1934, and a daughter, Narcyza, born in October 1936. However. Art still attracted Dariusz, so he took up the studies of art history at the University of Warsaw and he wrote his master’s thesis about the carved wooden church pulpits. Dariusz, being an employee of the ministry, was not mobilized in September 1939. After the capitulation of Poland, the years of occupation came. Deprived of his employer, he devoted himself entirely to painting at the side of his father Rafał and sister Maria in their studio at home. The outbreak of the Warsaw Uprising on 1 August 1944 forced Dariusz to part with his family. He left the house at 7 Wolska Street with only a few photographs of his wife and children in his jacket pocket. 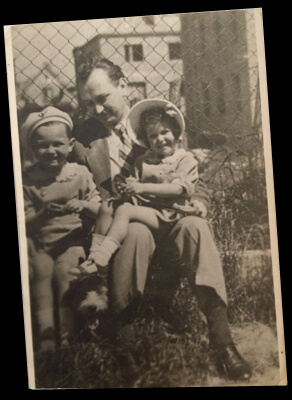 Dariusz Wąsowicz with children Rafał Narcyza and their dog. The photo was taken during the occupation years before August 1, 1944.

Dariusz put this picture in his jacket pocket when he fled his family home saying goodbye to his father, wife and children. He did not know that a few days later, on the morning of August 6, 1944, during the Slaugter of Wola, his family died at the hands of fascists: 77-year-old father Rafał, wife Hanna together with her 8-year-old son Rafał and 6-year-old daughter Narcyza and other, vainly hiding in the basement, inhabitants of the house on Wolska Street. The uprising fell, but the Germans’ retaliation continued and Warsaw was burning. The burnt remains of his loved ones were found by Dariusz in the basement of his destroyed house only in January 1945, after the ruins of Warsaw were taken over by the Soviet army. He was let into the still hermetically sealed capital by a Soviet soldier standing on guard in exchange for a piece of bread. 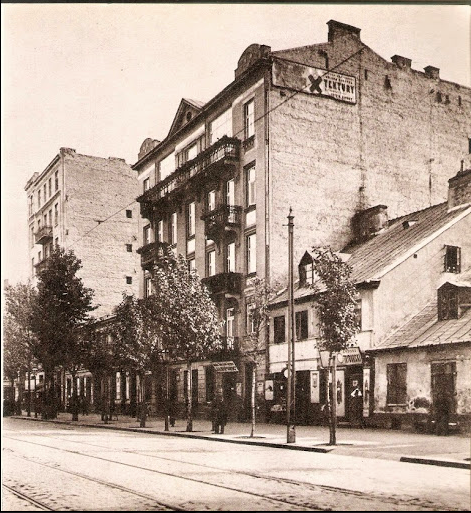 My father Dariusz was born here.
On the top floor you can see large windows of the painting studio where, during the occupation Dariusz was perfecting his painting skills under the supervision of his father.

The surrounding residents who fled homes recalled that on August 6, 1944, exceptionally black smoke rose from the burning building of the Wąsowicz family. It was surely Rafał’s painting studio full of oil paintings and his collection of works by old masters, including Dutch painters.

After the Warsaw Uprising, only a pile of rubble was left of this house and later an estate of blocks of flats rose in this area.

After the fall of the uprising, Dariusz, like many refugees from Warsaw, was taken in by good people near Warsaw. In order not to abuse their hospitality, he decided, like many other homeless Warsaw residents, to go to the fairly undamaged city of Lodz, almost deserted after the extinction of its Jewish inhabitants. On the way to Lodz, on a truck full of survivors from Warsaw, a young girl offered him a pinch of snuff for the empty pipe which he mechanically held in his mouth. This girl, Sabina, later became his second wife. Thanks to her, he regained the desire to live. Apparently, he told her: “I lost two children and I’d like to have four with you. The eldest Daria (PhD in Plant Physiology after SGGW) was born on 30 May 1946, the second (me) Gabryela on the 1st of August 1947, the third anniversary of the Warsaw Uprising , Jacek (violinist) on 2nd of June 1950 and Blanka (photographer illustrator) on 14th of October 1951.

After the war, Ojczulek decided to continue the free profession of an artist-painter. He painted mainly Polish landscapes and the Warsaw veduta. Apart from painting techniques: oil and watercolor, he also practiced artistic graphics. He was a member of the Polish Association of Visual Artists. For a few years he led a graphic design studio in Warsaw and several times he was a commissioner of the popular annual subscription of artistic graphics. He also stimulated our choice of artistic directions, arguing that these were independent, from such or other authorities or political systems as free artist’s professions offer. Poles have innate respect for art, culture and artists. That is why I have always filled in the forms – father’s profession ‘artist painter’ with a little pride.

Still now I remember Ojczulek’s silhouette against the light falling through the window, seated at his painting easel, when in the morning still in my pajamas I entered the room where he had apparently been sunk at work for hours.

Ojczulek was a likeable person.He was also liked by our friends, colleagues from school and university. Many of them still remember the long funny poems full of news which he wrote for the beginning and end of the school year or other school occasions.
Ojczulek died in Warsaw on March 14th, 1973 at the age of 63, after three heart attacks. Jacek’s friends from the Conservatory touchingly played at Ojczulek’s funeral the Andante Cantabile from Mozart’s Dissonance String Quartet. I am now trying to take care of Ojczulek’s painting legacy. After cleaning and restoring the paintings that remained in the apartment on Puławska Street, I intend to organize a posthumous exhibition in cooperation with Katarzyna Napiórkowska’s gallery. When it will be possible, I do not know yet.

I am also reading uncle’s Tadeusz’s diaries, which he started writing in November 1939 on leaving his happy family home at 7 Wolska Street in Warsaw (not knowing that it would be forever). I read them with amazement, because written on the spot by a young intellectual, a scientist, they are an exceptional first-hand historical document about Polish military’s journey across Europe during the Second World War.

When, as children: Darka, Jacek, Blanka and I on All Saint’s day November 1st at the Powazki Cemetary, while chewing’nougat’ were cleaning moss off the letters engraved on the grave of the victims from the house at Wolska street 7: Ojczulek said with a bit of black humor – “You owe everything to the Second World War”.

Below a poem written by my Ojczulek, which I recited at school for the tenth anniversary of the destruction of Hiroshima. I was 7 years old then. Ojczulek’s children: Rafał and Narcyza perished on 6 August 1944, Hiroshima was burned down on 6 August 1945.

The grave of the victims of Wolska street 7. Warsaw. Powazki Cemetary in Warsaw